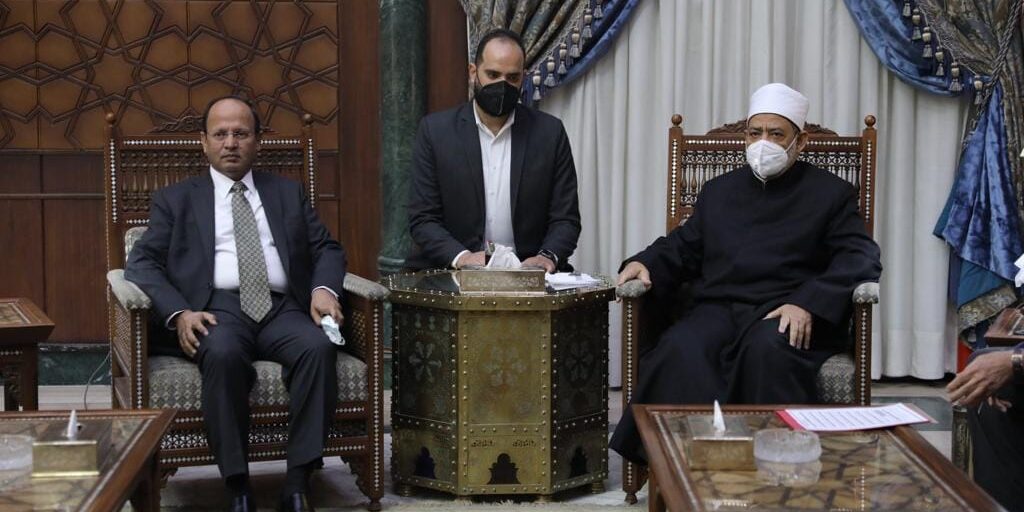 Ambassador Sajid Bilal called on His Eminence Ahmed El-Tayeb, Sheikh Al-Azhar Al-Sharif today. The Ambassador briefed the Grand Imam on the importance of the 17th Extraordinary Session of the Council of Foreign Ministers of the Organization of Islamic Cooperation (OIC) held in Islamabad on 19 December 2021 on the humanitarian situation in Afghanistan.

The Ambassador informed that besides Foreign Ministers and representatives from the OIC Member States and Observers, special invitees from the UN, International Financial Institutions (IFIs) and P-5 countries, Germany, Italy, EU and Japan also participated in the meeting. The Session reflected Pakistan’s abiding commitment and consistent efforts to promote peace and stability in Afghanistan and the continued well-being of the Afghan people, the Ambassador noted. A fund in the Islamic Development Bank (IDB) has been established to invite contributions from countries to provide humanitarian assistance to the Afghan people.

In addition, the Ambassador briefed the Grand Imam about the launch of Paigham-e-Pakistan Book, a compilation of Fatwas by Pakistani Ulemas, promoting tolerance and debunking extremist ideologies. The book is translated in Arabic by Al-Azhar University and the foreword has been written by His Eminence, the Grand Mufti of Egypt.

Shiekh Al-Azhar Al-Sharif praised the outcomes of the 17th Extraordinary Session of the OIC Council of Foreign Ministers and welcomed the efforts of Pakistan in bringing peace in Afghanistan and the region.